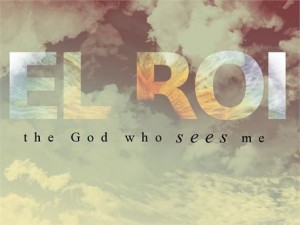 He saw Hagar in the wilderness – a slave, pregnant and running away from her mistress.
He saw the Samaritan woman trudging in the hot desert sun with a water pot – a scorned woman, alone and moreover, wanting to be alone
He saw the young, demon possessed man – bound by chains that he easily broke yet captive to the demons that shackled his mind and tortured his body.
He saw the poor widow – weeping behind the men who carried away her only son to bury him, wishing with all that was in her it was her and not him that lay there on that brier.
He saw the blind man sitting by the wayside on his cloak begging for someone to give him something to get through the day.

He gave Hagar a promise, a hope for tomorrow – He said “go back I will make your son a great nation”.
He offered the Samaritan woman water – He said “he that drinketh of this water that I give him shall never thirst”.
He bestowed upon the demon possessed man freedom from his bondage – He said “go and tell your family what God has done for you” (not will do but what He has done).
He raised the widow’s son from the dead. He said to the woman “weep not” and to the dead young man “Arise”. He is the Resurrection and Life.
He fulfilled the blind man’s desire when he called to Him. He asked “what do you want” and the man answered “Lord that I may see”.

He will do the same for you.
Jesus said ” Come to Me, all you who are weary and burdened, and I will give you rest.”
Not only is He the God who sees but, He is the God with Whom nothing is impossible.