The Name of Jesus He is the True Light…

The waters of Marah 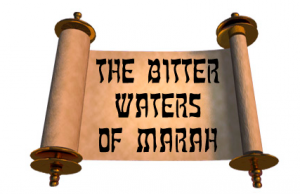 Then Moses led Israel from the Red Sea, and they went out into the wilderness of Shur; and they went three days in the wilderness and found no water. When they came to Marah, they could not drink the waters of Marah, for they were bitter; therefore it was named Marah.  Exodus 15:23

The children of Israel had just had a great experience; they had walked through the Red Sea as if on dry land.  The Egyptians tried to do that but were drowned. They were The Chosen.  And now three days later, they are in the dessert, they are thirsty and they want something to drink.  They come to this place and find water; however the last thing they expected was to find the water to be bitter.  But it was.  What we learn from this is that the children of God do go through bitter experiences, and many times it is when you are least expecting it.  We think, “God has done great things for me, I am in His will, He is leading me, and life is wonderful”.  But sooner or later we will come to experience the waters of Marah in our lives.  And the Lord allows this to test us.; continue reading the passage and we see that it was “there that He tested them.”  To get to the next class or level, we need to pass the test.  And so the Lord tests each one of us.  He tested Abraham.  When Abraham was a hundred years old, he became the father of Isaac, the son of promise – the promise being “for through Isaac your descendants shall be named”. And then when Isaac was older, maybe in his teens, the Lord God said to Abraham, “Take now your son, your only son, whom you love, Isaac, and go to the land of Moriah, and offer him there as a burnt offering on one of the mountains of which I will tell you”.  And we know of course that at the time when he took the knife to slay his son, the Angel of the Lord stopped him and Abraham offers a ram to the Lord instead of Isaac.  But Hebrews 11 tells us Abraham’s state of mind – Abraham reasoned that God could even raise the dead, and so in a manner of speaking he did receive Isaac back from death (NIV). He was tested and he passed, you might even say “with distinction” (seeing this event is recording in Hebrews 11 – faith’s hall of fame). And Job too was severely tested.  He too passed, the scripture testifying:   “In all this Job sinned not, nor charged God foolishly”.  For us to advance in our spiritual life, there needs to be a testing, a proving.  Take the illustration of the bow and arrow. The scripture says that children are like arrows in the hand of a mighty man.  God our Father is the Almighty One; we are his children.  And He takes us and puts us against the bow and pulls the arrow back against the string, and then He lets go and you fly off and hit the target or the bull’s eye.  But unless the arrow is pulled back it will not go the distance.  And so it is with you and me.  God needs to pull us back to go the distance.  He know how much the arrow needs to pulled back to go the distance.  If you are an arrow in God’s hand, then don’t despair. Look to the Lord, you are an arrow in HIS hands and He will launch you higher and farther.