The gift of God…

The miracle in Nain – a retelling 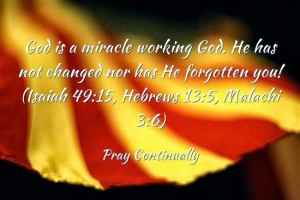 Her son is dead. She is all-alone.  Her husband had died some time before.  He had promised to be her companion had left her, never to return.  He who promised her that he would provide for her, take care of her and never leave her…he made a vow…and now he was not there.  She was left alone with a child a young boy.

She used to think and imagine, “I will care for him, and when I am old he will take care of me.  I will watch him grow and see his father in him and enjoy this life that is left to me, this boy – my only light.  I will find him a good wife and I will have grandchildren, how much I will enjoy them around me, their words, their laughter.  I can look forward to that. “

Alas that was not to be.  Her son – her light and joy – struck down with illness, now lay dead also.  Her dreams were not to be; like vapor they fizzled away; like the flower they withered away.

Watching him lying there, her thoughts running their cruel circles in her head.

What sorrow and agony pounded in her breast.  She wept, lamented, “my son, my son, would that I had died instead of you.  The piercing agony, the despair, the utter hopelessness of it all.  Death and despair.  The tears flowing.

She watches…now they are picking him up, washing him, dressing him in his burial clothes, putting him on the funeral brier.  They are taking him out.  She must go.  The tears continue to flow.  The heart is broken.  Who will put it back together?  Is there any reason to life.  She walks with the crowd, stumbling she picks herself up again and walks close to the bier.  She touches him.  He is so cold.  Where is her son, the one full of warmth and laughter?  Always a joy.  Why does he not smile at me?  Why do you lie so still my son?  They are reaching the edge of the town.

Ah Mother, how fortuitous you are.  There is Jesus coming on that road and you are about to meet Him.  To Him has been given all power and authority in heaven and on earth and under the earth.  He is the resurrection and life.  He has the keys of death and hell.  He is the Almighty God.  Ah mother He is walking towards you.

But Mother don’t despair, although you don’t know it, He knows.  He made this appointment with you and your son.  He always keeps His appointments.  He is standing before you, and a great crowd is behind Him.

What is this obstruction…she says…please, let me go bury my dead.

But Mother, standing before you is Life.  You are carrying your dead, but Life is standing in front of you.

Mother, don’t you know Him?  He knows you, He knows your sorrow.  His heart goes out to you.  He is the All Compassionate One.  So loving, so kind.

Dear Mother, do not weep.  Do not despair.  You believe in God, believe also in me – His eyes say.  He knows you.  He is the Answer.  He is the Life.

She sees this Man. Who is He? Why are all the people following Him.  He is coming closer.  He is in front of her.  Do not weep, He tells her.  She looks in His eyes.  He understands.  Ah but what good will that do, can anyone help me now.  I may as well be dead too. Do not weep, He tells me.  But what else can I do but weep.

Wait Mother, He is moving to the brier.  He is laying His hands on the brier.   All is still.  No one is moving.  He is speaking to your son.  “Young man, I say to you, Arise.”

He commands..  He is sitting, your son is sitting up.  Your son is talking.  Mother now He is talking to you.  Here is your son.  He is no longer dead.  Life had stopped death in its tracks.  That Life is the Son of God.

My son, he is sitting, he is talking.  Here he is..Alive!  Who is this Man?  Where did He come from?  He is not man.  He is God.  Who else but God can do these miracles.  God has visited me.  He has given my son life.  He knows me and each path that I take.  He met me on the road taking my dead son to be buried.

I have come back with my son, Alive and well.  God has met me and I met God on the road to bury my son.  My son who was dead is now alive.  Praise be to His glorious name.