His name will be called Wonderful 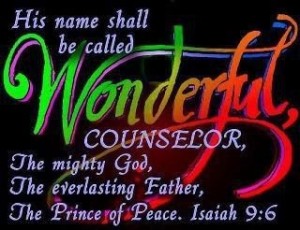 And His name will be called Wonderful… Isaiah 9:8

Wonderful… Jesus is Wonderful.
His birth is wonderful. There was none like it nor will there be another one like it. It surpasses everything ever heard of. God became a man, the Word became flesh. The God of creation a helpless, newborn baby.
Luke 2:7 – And she brought forth her firstborn son, and wrapped him in swaddling clothes, and laid him in a manger;

These two quotes describe a little bit of that wondrous event – incomprehensible yet fully true:
• …the idea of a baby and the idea of unknown strength that sustains the stars…G. K. Chesterton
• …Immensity cloistered in thy dear womb. John Donne
• The Son of God became the Son of Man that men might become the sons of God.
Wonderful!

His life is wonderful…
Jesus made the blind to see, the deaf to hear, the lame to walk, the sick healed, the dead raised to life, and broken lives made whole.
Demons fled from His presence, nature silenced at His command, food multiplied to feed thousands, water transformed into wine. John said that if all the things Jesus did were to be written down there would not be enough book to contain them. This is what those who witnessed Jesus’ miracles felt and said.
…that they were all amazed, and glorified God, saying, We never saw it on this fashion.. Mark 2:12
And they were all amazed at the mighty power of God. Luke 9:43
…and the multitudes marvelled, saying, It was never so seen in Israel..” Matthew 9:33

His death is wonderful.
Paul writes in Romans 5:8 “But God demonstrates His own love toward us, in that while we were still sinners, Christ died for us”.
Jesus died so that we may live forever more. It is for this very purpose that Jesus came into this world, to die for our sins,to be the sacrificial lamb who takes away the sins of the world. For He (God) hath made Him (Jesus) to be sin for us, who knew no sin; that we might be made the righteousness of God in Him, 2 Corinthians 5:21. Jesus gave His life for us of His own free will. In John 10: 18 Jesus says “No man taketh it from me, but I lay it down of myself. I have power to lay it down, and I have power to take it again”. He is the perfect Lamb of God. He is the Lamb of God slain from the foundation of the world.

His resurrection is wonderful.
He is the First begotten from the dead. Yes, there were others raised to life but they all died again. Jesus arose and is alive forevermore. He has conquered death and the grave. When He appears in glory we shall be like Him. Because He lives we have no fear of death and of the grave. And we too can say – Death is swallowed up in victory. O death, where is thy sting? O grave, where is thy victory? 1 Corinthians 15:54, 55